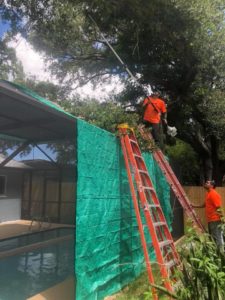 Just a reminder, tree removal in Clearwater or anywhere for that matter can be exceptionally dangerous if you do not know what you are doing. Many people die every year in the United States attempting to cut down trees without the proper training or certification. Also, depending on where you live or what type of trees you are trying to cut down, it might be against the law without the proper permits in place. For larger tree removal or trimming, you will need specialty equipment and safety gear to do it properly. For this and many other reasons, it is foolish to try to do it on your own and you should hire a experienced tree removal company in Clearwater or Palm Harbor to do the job for you!

What happens to overgrown trees

In the Clearwater, Florida area we can be subjected to out of no where downpours one minute and sunshine the next. Our warm climate allows for rapid growth which can lead to problems for trees. Overgrown trees often have weak branches that have the risk of breaking off when a thunderstorm or heavy winds blow through the city. When dead or weakened branches break, there is a very real possibility of damage to structures, power lines and cars. Weak branches also pose a threat to you, your family and, if you are a business owner, your employees and customers. Overgrown trees may also be dangerously close to power lines which can result in a loss of power for days while a repair person fixes the line. To avoid these headaches call a local tree service in Clearwater, Florida today if you feel your trees may be in need of work.

Cleveland Street is one of the city’s historic avenues, and the city includes Spectrum Field and Coachman Park. The city is separated by the Intracoastal Waterway from Clearwater Beach.

Clearwater is the home of Clearwater Marine Aquarium, where bottlenose dolphins Winter and Hope live.